In the late 1980s women artists took the reins of the contemporary Aboriginal art movement in Australia. After years of working in the shadows, assisting their fathers and husbands, they burst onto the scene, giving it a new vitality and dynamism. Women artists redrew the boundaries of Aboriginal art, and continue to be among its most daring innovators. Though cultural activity has always been central to the secular and sacred lives of women, art making in recent decades has offered a key means for women to also maintain their social and economic independence.

The nine artists in this exhibition—Nonggirrnga Marawili, Wintjiya Napaltjarri, Yukultji Napangati, Angelina Pwerle, Carlene West, Regina Pilawuk Wilson, Lena Yarinkura, Gulumbu Yunupingu, and Nyapanyapa Yunupingu—offer a glimpse into the diverse contemporary art practice of Aboriginal Australia. Hailing from remote areas across the island continent, they are revered matriarchs, commanding leadership roles and using art to empower their respective communities. The works are steeped in ancient cultural traditions, specific to each artist, and yet speak to universal contemporary themes, revealing the continued relevance of indigenous knowledge in the 21st century.

The subjects of the works range from remote celestial bodies and the native bush plum’s tiny flowers to venerable craft traditions and women’s ceremonies. Accordingly, each work grapples with the most fundamental questions of existence. Every mark bears testament to natural and cosmological cycles that put one’s being into perspective, whether the ebb and flow of sacred waters and ancestral sands, or the simple passage of a brush against canvas. These artists make marks upon the infinite, asserting both our shared humanity and differences in experiencing and valuing the same planet.

In May 2018, Regina Pilawuk Wilson (b. 1948, Daly River, Northern Territory, Australia) visited the Phillips to paint two murals in the museum’s courtyard—the first murals painted by an Aboriginal Australian woman in the US. Special thanks to the Paula Ballo Dailey Memorial Fund and Dennis and Debra Scholl for making the murals possible. Mural assistants Mike Guy and Rodrigo Carazas.

Nangi/Yerrdagarri (Traveling Message Stick), 2018
Yerrdagarri are a form of communication used until the mid-1900s between Aboriginal communities and clans in the Northern Territory of Australia and beyond. Regina Pilawuk Wilson recalls young men arriving from afar with message sticks to announce ceremonies, funerals, and war when she was a child. Each morning they would put a line on the stick to keep track of how many days they had been away. Sometimes the men would travel for years at a time to send a message before returning to their community. Wilson paints these message sticks to share and pass down the traditions of her people.

Fi (String Game), 2018
Fi was a past time of the people in the Daly River/Peppimenarti region. The string was made from rolled sand palm and the games were taught by the older women to children as a way of having fun and sharing stories. The black string represents the long-necked turtle, the red rectangle represents the arriving storm cloud, and the grey vertical shape shows the long spears that were used for fighting and hunting animals. 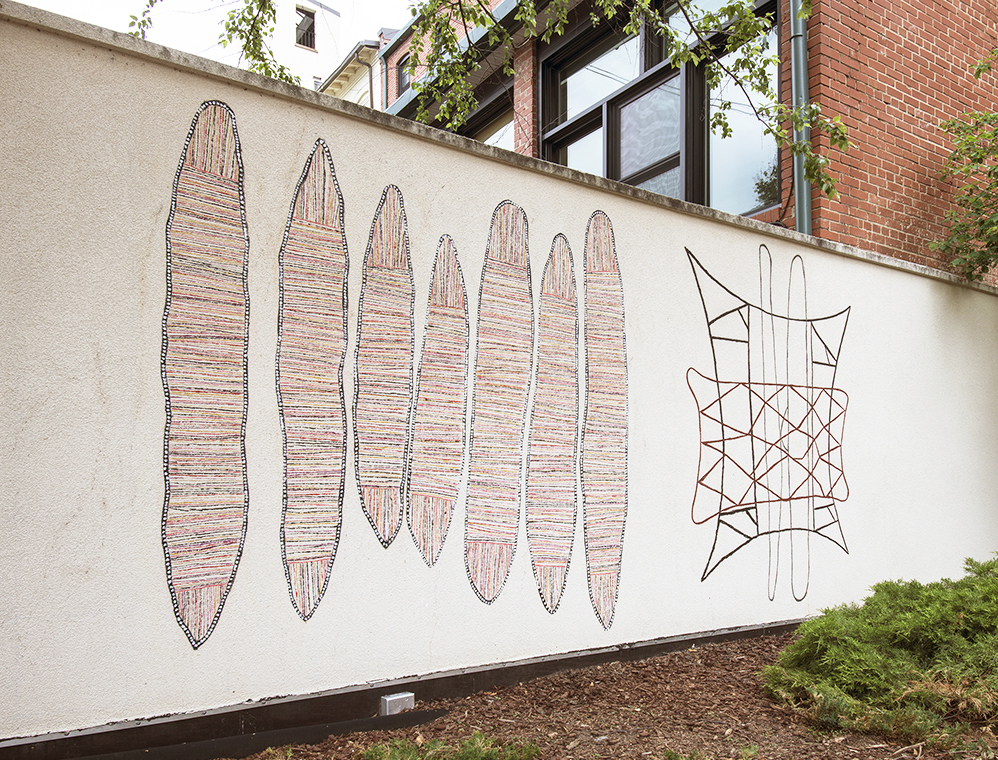 This exhibition is presented by Chevron.

Generous support is provided by Andrea and Steve Strawn and by U.S. Trust and the Embassy of Australia.

Additional support for the presentation at The Phillips Collection is provided by Dennis and Debra Scholl, Charles McKittrick, Jr., and from the Paula Ballo Dailey Memorial Fund.

In-kind support is provided by

Marking the Infinite originated at the Nevada Museum of Art in Reno, Nevada, and was organized by William Fox, Director, Center for Art and Environment, and curated by Henry Skerritt, Curator, Kluge-Ruhe Aboriginal Art Collection of the University of Virginia. The works in the exhibition are drawn from the collection of Debra and Dennis Scholl.